Throughout the Eastern and Midwestern United States, free-ranging snake populations are being affected by snake fungal disease (SFD) caused by Ophidiomyces ophiodiicola. The characteristic symptoms of infection include swelling, lesions, crusts, and skin nodules typically found on the head. Mortality in infected snakes is a real possibility due to tissue damage leading to secondary infections or damage that inhibits the snake’s ability to obtain food. 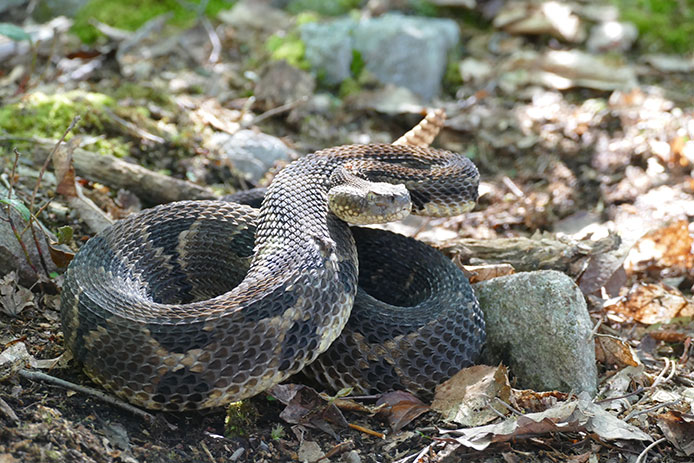 Furthermore, infected snakes have been noted to exhibit behaviors that leave them vulnerable to predation such as basking when they should be hibernating, or resting in unprotected areas. There is a concern for Timber rattlesnakes (Crotalus horridus) infected with SFD due to their status as a threatened or endangered species in certain areas of the U.S. The effects of this pathogen on timber rattlesnake populations was made evident in New Hampshire when it contributed to a decrease of over half in just a year’s time.

To determine the risk of SFD in Pennsylvania timber rattlesnakes, samples were collected by swabbing captured snakes to test for the presence of the fungal pathogen. Genes specific to Ophidiomyces ophiodiicola (the causative agent of SFD) were targeted using a real-time polymerase chain reaction (PCR) assay. Results of this study will assist in evaluating the prevalence, seasonal progression, and severity of Ophidiomyces ophiodiicola infections throughout the state of Pennsylvania.

Results of this study are pending publication, and as such will not be available until after publication has occurred. For more information on this project please email wildlifedna@esu.edu.