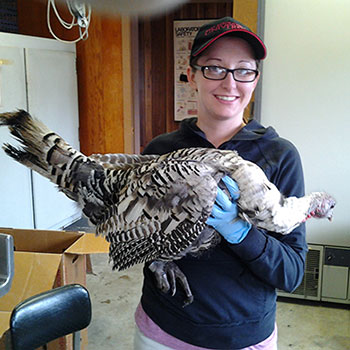 The eastern wild turkey is native to Pennsylvania and New Jersey. Historically, the wild turkey was found throughout the United States but experienced rapid population declines due to European settlement.

To increase the wild turkey population in Pennsylvania, game farms were established to raise wild turkeys and translocate them throughout the state.

To determine the population dynamics eastern wild turkeys were assessed for genetic diversity and gene flow. In cooperation with the Pennsylvania Game Commission, feather samples were collected.

Through DNA extractions and a ten microsatellite multiplex reaction, genotypic profiles were constructed. Diversity was assessed through the average observed heterozygosity and total number of alleles per locus.