Optimization of a Multiplex PCR Analysis

Timber Rattlesnakes (Crotalus horridus) have experienced habitat loss, population fragmentation, and extirpation throughout their range in the Northeastern United States. Information regarding the genetic variation of this species can be used for conservation management efforts. 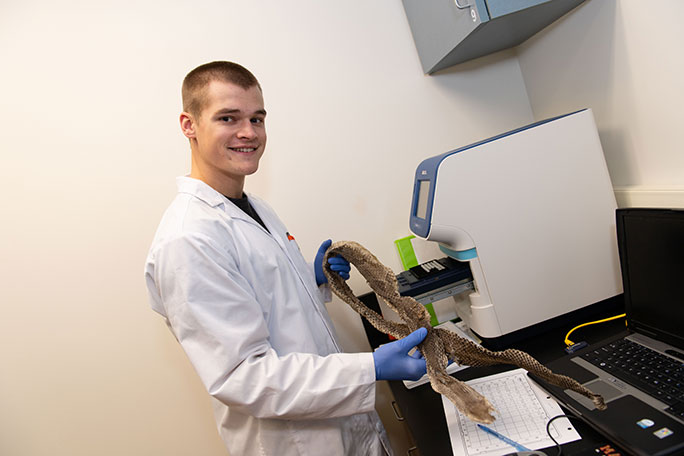 Polymerase chain reaction (PCR) technology has allowed for the rapid advancement of genetic studies in recent years. Multiplex PCR is one technique that is increasingly being used because of its various applications. This technique makes it possible to amplify multiple loci of the genome at one time. By amplifying a greater number of loci at a time, the cost for analysis of multiple samples is greatly reduced and the process is made significantly more efficient.

A multiplex of nine primers was designed for genotyping populations of C. horridus to evaluate genetic variation. DNA was used from shed skins, tissue samples, and scale clippings. Samples are still being collected and tested to increase the sample size and start building up a database. The objective of this research is to optimize this nine microsatellite multiplex PCR reaction, and to evaluate the success of this on various sample types. This multiplex could prove to be a useful tool for population analysis of C. horridus.

A future study can use this multiplex to genotype large numbers of C. horridus. A database would log every sample collected. This can then be used for subsequent research including population studies that look at the genetic diversity within and among populations. A study such as this can be repeated in the future and compared to observe changes in the populations’ genetics over time. This is a way of monitoring C. horridus populations, and can certainly aid in conservation efforts if the species begins to show a decline in health or numbers.