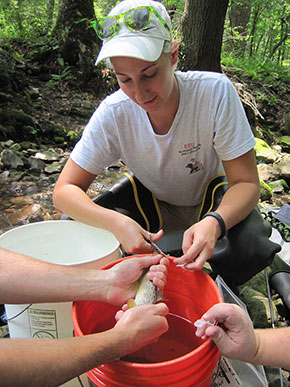 The population of brown trout from the Pequest fish hatchery demonstrated a loss in genetic diversity illustrated by the low number of unique alleles (6) and average number of alleles (7.83) when compared to the wild reproducing population (33 and 12.17, respectively).

Although the observed heterozygosity was slightly greater then 0.600, the low number of alleles shared among this population is lower than a wild reproducing population.

Further evaluation with a larger sample size would give a better representation for the differences in the genetic profiles between two populations.

The six unknown furunculosis samples were genetically different from the wild reproducing and hatchery population except for sample 1-2 which has similarities to all three populations.

The genotypic analysis of these samples indicates they are from another population.

This is shown by the nine unique alleles present and the population cluster that was represented by Bayesian clustering analysis.