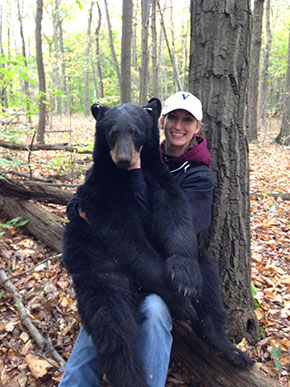 Black bears in New Jersey are a contiguous population. Over the last 30 years, NJ’s black bear population has been increasing and expanding its range southward and eastward from the forested areas of northwestern NJ.

The population has grown due to increased black bear habitat.

We evaluated aspects of genetic diversity and gene flow for 4 management zones in NJ using genotypic data from 9 microsatellite loci.

Measures of genetic diversity were estimated at the individual level, as well as within and between management areas.

A total of 84 alleles were observed at the 9 microsatellite loci amplified in a multiplex reaction.

The degree of variation ranged from 6 to 12 alleles per locus, with an average of 9.33 alleles per population at each locus.. Results from STRUCTURE 2.3.4 suggest that NJ black bears represent a panmictic population.